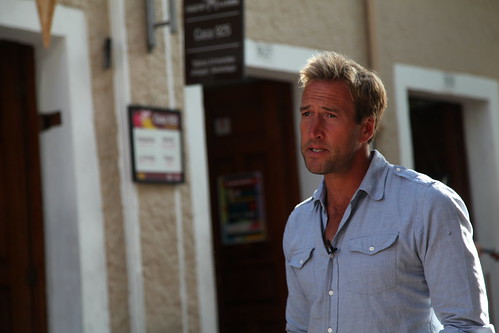 One of our favourite travel programmes on TV, Ben Fogle’s New Lives in the Wild, has started Season 6, in which Ben meets people who have turned their backs on the daily grind and have setup something new or wild somewhere new and wild! It’s a great insight into what people can do if they really want to do something different and get away from it all.

Ben begins his travels this season in the remote Wilderness Island, off Australia’s north-western cape, to meet Jim, who is pursuing his “Robinson Crusoe” dream.

This series will include a woman who set up a farm on the edge of the Sahara, a hostel owner in the Guatemalan jungle, and a British couple who founded an Alpaca farm in Spain.

You can see the series on My5.

I published a blog post a while ago with my favourite US Road Trip movies, but when it comes to listing British Road Trip films, that is far harder. But here’s my attempt:

Shot in black and white by Wim Wenders’ assistant cameraman Martin Schäfer and featuring music from a number of new wave bands from the time, as well as established artists such as Kraftwerk, Devo and David Bowie. It is a journey through late seventies Britain by way of a road trip from London to Bristol, with Robert, a DJ (played by David Beames) attempting to investigate the suicide of his brother.

The TV series with Steve Coogan and Rob Brydon. So desperate are we for good road trips that we had to accept this as a “film”, but it is excellent. Coogan and Brydon are hilarious, the countryside beautiful and the food looks delicious.

A dark and very funny comedy where the ‘hero’ Chris, takes his girlfriend on a trip around the UK but a ‘dream caravan holiday’ does not turn out to be such a dream. Definitely black in its humour and a dark ending not to be forgotten.

31/10/17: And an honourable mention to Channel 4’s new series, The End of the F***ing World – a road trip by 2 disillusioned teenagers. Excellent viewing.

If this inspires you to combine your own road trip with some serious hiking, then you could consider the Three Peaks Challenge – in which case, we have some t-shirts which might complement your trip!

BackpackingTV have released the full episode of Eric Hanson’s trek along the 450 mile Jordan Trail, from their Epic Trails series of videos.

The trail crosses the country, connecting the length of Jordan from Um Qais in the north to Aqaba in the south, passing through inspiring landscapes and historical sites, including the ancient city of Petra.

You can see more information about the trail on The Jordan Trail website.

There are many road trip films set in the USA, but here is my top 5. Some of them may be less common than other similar lists – but that’s the idea, right, to learn about something new and alternative!

Okay, I know this isn’t usually considered to be a ‘road trip’ in the normal sense, but they do go on drive around roads – they just happen to limit themselves to California. It’s a wonderful film, full of pathos, frustration, humour and of course wine. Paul Giamatti is brilliant.

This is Dave Gorman’s film of his book, and although I think the book is actually better (okay, yes, I read that first), the film still gives you a vision of some of the experiences he describes in the written version. It’s an account of how Gorman tries to drive across America without giving any money to “the man”, eating, sleeping and filling up with gas at independent stores and ‘Mom and Pop’ places. It’s full of Gorman’s insights and humour and gives you a different view of the US.

Just a wonderful film of a non-conforming family, a VW van, a dodgy grandfather, a suicidal gay Proust-loving man and a little girl who wants to be Little Miss Sunshine. Made me laugh out loud so often. Just fantastic. If you have never watched this then rent it tonight.

Maybe a bit predictable that this would be in the list but there’s a reason for that: and that’s because I think it is the architypal American Road Trip film. It has everything from the roads and the amazing American scenery of the mid-west, a great soundtrack that will stay with you, stunning performances from Sarandon and Davis (and a still young Brad Pitt) and plenty of plot to keep you engrossed. And of course a famous ending over the Grand Canyon. What more could you want from a road trip?

Non-US Dollar prices are estimated – but should be pretty accurate! This is because the actual price with the latest currency exchange rates will be calculated in real time when you checkout.

This website uses cookies to improve your experience while you navigate through the website. Out of these, the cookies that are categorized as necessary are stored on your browser as they are essential for the working of basic functionalities of the website. We also use third-party cookies that help us analyze and understand how you use this website. These cookies will be stored in your browser only with your consent. You also have the option to opt-out of these cookies. But opting out of some of these cookies may affect your browsing experience.
Necessary Always Enabled

Any cookies that may not be particularly necessary for the website to function and is used specifically to collect user personal data via analytics, ads, other embedded contents are termed as non-necessary cookies. It is mandatory to procure user consent prior to running these cookies on your website.